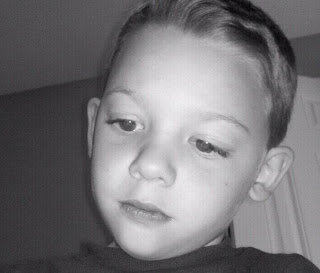 My 5-year old, Jacob, has a real interest in learning words from foreign languages.  He loves to roll his "R" when saying Spanish words.  Several times he will say things, that we think is gibberish, only to find out later that it is Chinese!!! He seems to be most interested in Spanish and Chinese.  That being said, the other day he corrected me on the meaning of a French word!

So here is the thing.  I would like to encourage him to learn new languages.  Learning them at a young age has to be easier then learning them when you are older.  Not only that, but it would be a huge advantage in this globalized world to be able to communicate in more than just English.  If you have any ideas, methods, or recommendations on how I, best can help him to learn these languages please let me know. Comment below or on my Facebook wall.  Thanks!!!
Posted by Jeff Kamp at 12:14 PM No comments: Links to this post

I feel it is important to give back to this world.  There are people that are in desperate need.  So we give to churches and charities.  We volunteer our time to help others.  As concerned citizens we try to give to organizations that will maximize our given dollar amounts and time.  There are always moments when we find out about some need or travesty, and we feel compelled to give.  But, have you ever felt the need to start your own charity?  I recently read an article on Inc.com about Scott Harrison and how he started Charity: Water.  It is an interesting article about how to develop a successful charity. If you go to Charity: Water's website you immediately feel how this charity is different. With video, nice aesthetics, and tools for developing fund raising campaigns you immediately feel compelled to join their cause.  It is also interesting how they follow up on their projects, by posting pictures, by gps geotracking, and by blog posts.  You can read the Inc.com article here:

How to Become a Social Entrepreneur | Inc.com

With that being said I have started a page on this blog called JK Philanthropy.  It will have all of the organizations that I try to support and raise funds for.  Please check out this page and donate where and when you feel lead to do so.  Together we can impact the world and make a difference.

I am trying out Google's new social network, Google+.  If you would like an invite, please click the link below: