So here is the deal. I am addicted to A Love Supreme. It's true. During the day, at work, I listen to John Coltrane's studio version of it. Then in my car I listen to the Brandford Marsalis Quartet performing it live. 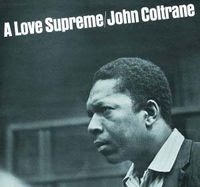 Obviously Coltrane wrote the piece so his studio album is the original version of the song. The song is made of four movements: I. Acknowledgement, II. Resolution, III. Pursuance, IV. Psalm. In total each version is around 45 min. Movements I. and IV. are based on a modal scale and are formless. They are based more on a melodic idea rather than a constructed song formulation. Movement II. is based on three 8 measure lines. The 3rd movement opens with an unmeatered drum solo and the goes into a 12 bar blues in Bb minor. What I love about Coltrane's version is the raw emotion convied in the music. At times it sounds like what people have identified with Coltrane "Sheets of Sound". 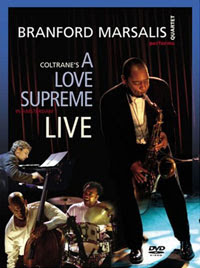 Branford's version is equally impressive and unique, while still holding on to the original concepts of Coltrane. Branford's tone is more rounded then Coltrane's sound. If there is a saxophone sound that I would want to emulate it would be Branford's. To me it is very interesting how different the two versions are and at the same time the ear goes "this is definatly A Love Supreme". Anyways I just had to share my love of this music with all of you.