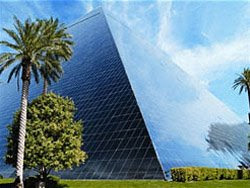 As many of you know I am a huge fan of Las Vegas. That being said I am not happy with the current trend. It was just annouced that the Luxor is undergoing a $300 million detheme-ing renovation.
Click here to read the details. I can certainly understand the casinos wanting to get rid of the kid freindly atmosphere of the 90's, but everyone is going to this hip, ultra modern feel and look. As far as I am concerned every hotel was fun to go to, however cheesy the theme was, just because they were different. Now every hotel has some hip ultra modern club or bar that looks and feels the same as every other hip and modern bar. This all started when Treasure Island changed its name to TI and got rid of the Pirate show. The sirens of TI are nice, but aren't adults entitled to a good pirate show every now and then. I just think this new ultra modern renovation of LV has taken away a lot of its creativity...rumor has it there going to take down the Sphinx in front of the Luxor.....it is a pyramid!!!, what is wrong with having an eygption theme!!! Anyways I just had to get this off my chest....next will they detheme new york new york, or paris. Alladin lost its theme, Now that it is the planet hollywood. Don't get me wrong I still love Vegas, I'm just not to excited about this current trend.
Posted by Jeff Kamp at 3:05 PM

it's a good thing the Hooter's won't loose it's theme. i agreet though. in Sin City, the gaudier the theme, the more fun they are to go into. if i am looking for a hip cool bar, i will go to Mr. G's

New York New York is undergoing a full renovation of the casino floor. The casino is going to be very chic and up-scale.

the removal of the bridge and stream (completed)

the street lamps and trees will all be removed (completed)

3/5/08 Hedwigs, the new owners of 727-room Hooters Hotel and Casino, have decided to abandon the Hooters image for a more high-end, chic, boutique hotel and casino. They will invest $130 million for the redevelopment and expansion of the property.

The $225-million purchase of Hooters should be complete by late spring 2008.

The decision to change the image was based on the declining revenue and popularity of the Hooters hotel. The main issue (based on observations and countless user reviews) is most likely due to the lack of female clientele. Guys frequented hooters, figuring it would be a good place to "get lucky", but the only women there, were the employees. The word was out that Hooters was a "sausage fest" and it soon fell off the cruising-map.

The new (yet unnamed) boutique hotel will get an expanded casino and several of its rooms will be reconfigured into suites.

This will be the hotel's second complete makeover in only two years. Hooters spent $130 million remodeling the old San Remo, which was completed in 2006.