So this year I decided to buy Indy 500 tickets. I was lucky and ended up getting tickets right at the end of turn one. Great seats!!! I have always been a fan of Indy racing. It was Jami, her brother Chad, and cousin Scott, and I that went. We left after the first rainout at 113 laps... the race continued after a three hour delay, but we were over half way home. This first picture is where the wreck of the third woman in the race Milka Dunno ended up. 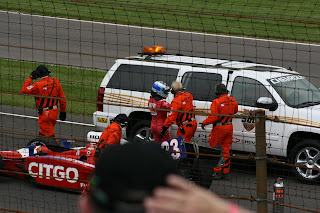 This next picture is of Al Unser Jr. following the pace car. I have always been a big fan of Little Al and continue to support him even through this though time in his life. So this picture looks like he is first even though by this point in the race he is several laps behind. 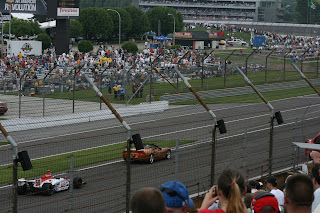 Did I mention we had great seats we could see all of turn one, the south shoot, and all of turn two. 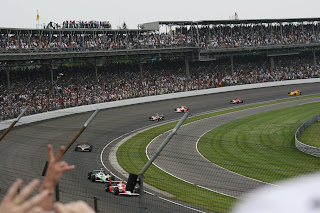 i thought you forgot how to blog. welcome back. i expect great things.