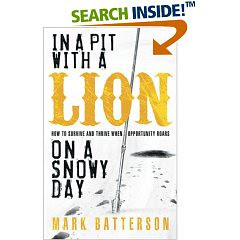 I am participating for the next 3 Wednesdays in the Men's leadership breakfast at Granger Community Church. We are Studying a book by Mark Batterson called "In a Pit With A Lion On A Snowy Day". Pastor Mark Beeson is leading the discussions. The book is about Benaiah who kills a Lion in a pit on a snowy day.

20 Benaiah son of Jehoiada was a valiant fighter from Kabzeel, who performed great exploits. He struck down two of Moab's best men. He also went down into a pit on a snowy day and killed a lion. 21 And he struck down a huge Egyptian. Although the Egyptian had a spear in his hand, Benaiah went against him with a club. He snatched the spear from the Egyptian's hand and killed him with his own spear. 22 Such were the exploits of Benaiah son of Jehoiada; he too was as famous as the three mighty men. 23 He was held in greater honor than any of the Thirty, but he was not included among the Three. And David put him in charge of his bodyguard. 2 Samuel 23 20-23


Who better to put in charge of your bodyguard than a man who has killed a lion? This book illustrates how we all have obstacles that cross our path, and it is how we deal with these obstacles that make the difference. This first week we covered the first three chapters of the book. Here are some of my notes:

- Normal people run away from Lions
- God is in the business of strategically positioning us in the right place at the right time
- God is always using past experiences to prepare us for future opportunities
- the biggest risks are the greatest opportunities
- Goodness is not the absence of badness
- Do the best you can with what you have where you are
- Spiritual maturity is seeing and seizing God-ordained opportunities
- Lion chasers grab life by the mane
- Sometimes God won't intervene until something is humanly impossible
- one of the most exhilarating things in the world is doing something that no one thinks you can do
- most of our problems are not circumstantial they are perceptual
- God wants you to get where God wants you to go more than you want to get where God wants you to go.
- Don't accumulate possessions accumulate experiences
- Faith is unlearning the senseless worries and misguided beliefs that keep us captive
- The cure for fear of failure is not success, but it is failure.
- Jesus never ran away from his detractors or persecutors, he chased them.
- We are in a world that says "you can't do it"
- Somebody has to take responsibility
- The more responsibility you have the less freedom you have
Posted by Jeff Kamp at 10:55 AM

Email ThisBlogThis!Share to TwitterShare to FacebookShare to Pinterest
Labels: books, god, In a Pit with a lion, leadership