On Saturday I did something I have never done before. Jami, Jacob and I, along with Jami's aunt and uncle, Lola and Mike, took the South Shore to Chicago. 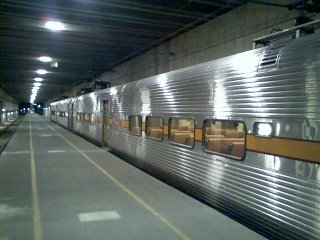 The train stop just short of the Chicago river on Michigan Street. So we had to cross the bridge over the river to get to the shopping area of Michigan street. When crossing the bridge, and me being a fan of "The Apprentice" I had to take a pictue of Trump's new building being built, it has a long way to go yet. 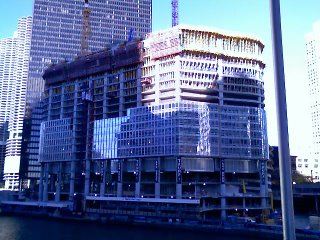 After going a couple of blocks west to eat at the Hard Rock Cafe we went back to Michigan Street and went to Water Tower Place. This is a picture from across the street from Water Tower Place looking up at the John Hancock building. 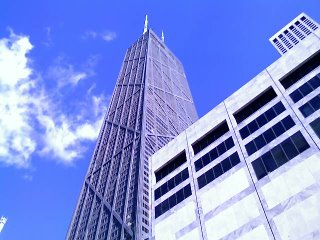 After some more shopping we went to the Weber Grill and had supper. This is fast becoming one of my favorite places to eat in Chicago. This was the third time Jami and I have ate there. I had the beer can chicken and garlic mashed potatos (YUMMY). Anyways after that we had to head back to the station to catch the last train back to South Bend. Here is Jacob playing with Mike's new "Life is Good" hat while waiting for the train. 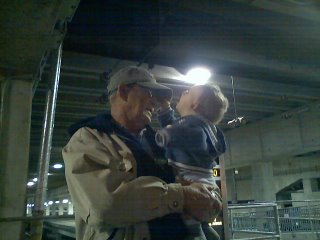 Just a guess, but I think we wore Mike out!!! 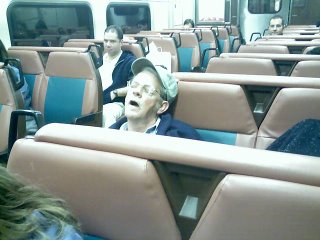 Overall it was a fun day and I would recomend trying the South Shore sometime. I found it very on time and enjoyed not having to drive to Chicago for once.
Posted by Jeff Kamp at 10:29 AM