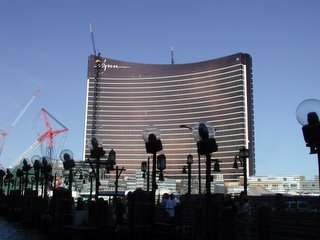 Las Vegas is one of my favorite places to visit. Obviously Vegas does has its moral dilemas, but putting that aside I would like to talk about the creativity it takes for the city to rebuild itself and for the innovation that takes place in our own lives. Some of the most famous implosion videos come from buildings, that by most standards are luxurious, being torn down and being rebuilt in Vegas. Last night I saw a interview with Steve Wynn on CNBC. He was talking about the innovation that it takes to keep Vegas growing. For those of you that do not know who he is, he has created the modern skyline of Las Vegas. He developed Mirage Properties which included the Mirage, Treasure Island, Monte Carlo, and the Belagio. He sold these to MGM and has now built his multi-billion dollar Wynn Resort. He said that things that kept peoples attention 10 years ago wouldn't even draw a yawn today. When thinking about this he is absolutly right. I think back 8 years ago when I was in college and cell phones were just becoming cheap enough to buy. If your parents had a cell phone wow they must be cutting edge, now I go to school and every kid has one and doesn't think a thing about it. The internet was just becoming user friendly 8 years ago, any web page was cool. Now it takes a multi media presentation on the web to catch peoples attention. Technology has allowed us to innovate faster than ever. The big idea, as Donny Deutsch would say or think big as Donald Trump would say has to be faster and more technologically advanced then ever before. Wynn's big idea, Wynn Resort, had more innovations in online building, design, and outsourcing than any other hotel ever built. The Le Reve showroom at Wynn is one of the most advanced theaters ever built. The website for Wynn Las Vegas has interative tours of the rooms and voice prompts from Mr. Wynn himself. In the interview he said he needed to generate 3 million dollars a day for Wynn Las Vegas to be successful. We limit our scale of thinking all the time. People who have these big ideas are not doing anything that nobody else has thought of. They just act on their ideas and make them happen. They plan for success and then they execute, simple as that. This brings up the question, how do we break out of our shell and become innovative? How do we purposely pursue innovation at work, home, in our religion? What steps do we take to keep peoples' attention? (the above picture is a picture I took in 2004 for when Wynn Las Vegas was being built)
Posted by Jeff Kamp at 3:09 PM No comments: Links to this post

I have added a subscription service to my blog. Just type in your email down at the bottom right and you should recieve email when I post a new entry.
Posted by Jeff Kamp at 12:41 PM No comments: Links to this post